Across the country ports are preparing for the larger size Post-Panamax Ship that will be coming in soon.  Most U.S. Ports have had to increase their capacity to handle these larger ships.  Additionally, the Panama Canal expansion has resulted in major impacts to U.S. Ports.  With more than three hundred commercial and inland ports needing major improvements to assist in the increases in imports coming into the United States, what are some ports doing to prepare?

The East Coast and Gulf ports are vying to attract the bigger Post-Panamax ships for the economic benefits they will bring with them.  The New York and New Jersey ports are increasing their bays to meet the 50 feet channel depth.  This increase will allow for the channel width to be increased where the larger ships need a wider turning berth. The cranes will be updated so that they can handle the weight of the larger Post Panamax ships.

The Bayonne Bridge is 152 feet tall and does not allow for the larger Post Panamax ships to get into the bay.

The Bayonne Bridge connecting Bayonne, New Jersey and Staten Island, New York also gets a lift.  The Bayonne Bridge is 152 feet tall and does not allow for the larger Post Panamax ships to get into the bay.  Raising the bridge by the needed 65 feet is estimated to cost $1 billion.  This improvement will allow the East Coast ports to be competitive when competing for importing commodities.

The Port of Jacksonville

The Jacksonville, Florida Port is receiving state and local funding for the estimated cost of their ports improvements.  With cooperation from the U.S. Army Corps of Engineers the port has had to undergo major changes to waterways, such as going from 40 feet to 47 feet. Eleven miles of the shipping channel will need an increase in its width which includes the mouth of the St. Johns River to the JAXPORTS Facilities.  This will require authorization from the United Sates Congress.  This upgrade will provide over 3,500 jobs during the project and will allow for the port to handle larger Post Panamax ships. 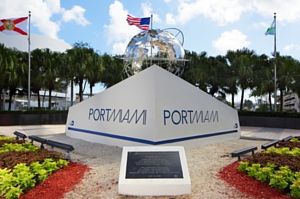 PortMiami can serve vessels up to 22 containers wide and 9 containers above deck with an additional eleven containers below.

The PortMiami has invested over $1 billion into their capital infrastructure to be able to accommodate the Post-Panamax ship.  PortMiami can serve vessels up to 22 containers wide and 9 containers above deck with an additional eleven containers below.  They have also added a fast access tunnel that connects directly from the port to the Interstate Highway System.  This will allow for a quicker turn around for the importing consumers.

The Port of Mobile

The Port of Mobile, Alabama is investing $5.2 billion dollars in their port expansion and is expected to be completed by the end of 2016.  The Port of Mobile has already been handling the bigger ships because of changes made to their port, including a $40 million turning basin, completed about five years ago.  They are currently adding two more cranes which should help accommodate the 2000 ship increase annually they expect to see as a result of the Panama Canal Expansion.

The Port of Long Beach

The Long Beach Port will be investing $4.5 billion to be able to accommodate the Post Panamax Ships. The port is currently losing money and cargo because it has not been able to keep up with the increase of the size of the ships and the congestion problems still hounding the California ports.  Part of the expansion plan for Long Beach is to replace the Gerald Desmond Bridge.  This bridge connects Long Beach to terminal Island and is a major trade path that carriers 15 percent of all container cargo that is imported to the United States.

The Northwest Seaport Alliance, which manages the Seattle and Tacoma, Washington Ports, plans on investing $15.8 million in TIGER grant funds.  The Northwest Seaport Alliance is the 3rd  largest gateway in North America by total Twenty-Foot Equivalent Unit (TEUs.)  They also handled 3.4 million container volumes in 2014.  This money will be used to modernize Terminal 4 and will include updates on cranes and other areas of the port.