The Jones Act: What You Need to Know

The 1920 Jones Act is a hot topic of discussion as debate rages on about the relief efforts to help the people of Puerto Rico recover from the devastation Hurricane Maria wreaked on the island. The White House agreed to temporarily waive The Jones Act on Sept. 29 to help goods be distributed more efficiently during relief efforts. We have answers to the following six questions you have about The Jones Act and how it affects the shipping industry.

The White House agreed to temporarily waive The Jones Act on Sept. 29.

The Jones Act was formulated to foster a safe U.S. network of merchant mariners after World War I. This act was created after a fleet of U.S. ships was destroyed by the German navy. In short, the law mandates that all goods transported by water between U.S. ports must be carried on ships that fly the American flag and that were constructed in the U.S. and operated by a majority of U.S. citizens.

Why Does The Jones Act Restrict Boats From Entering Puerto Rico?

This is a misconception. Boats from different countries can enter Puerto Rico and do so regularly. However, since Puerto Rico is an unincorporated U.S. territory, when ships are dropping off goods, those ships must be built in America and must come from a U.S port. This can make it more difficult in times of tragedy to comply with the regulation when goods need to get to destinations quickly.

This act also applies to all U.S. ports around the world except the U.S. Virgin Islands.

Why Was The Jones Act Waived for Puerto Rico? 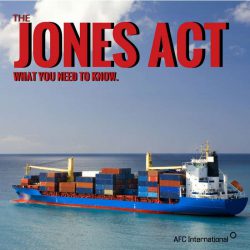 The Jones Act was waived recently for Hurricanes Harvey and Irma earlier this year.

The island continues to struggle with distributing goods to help with Hurricane Maria relief efforts. Vessels complying with The Jones Act that regularly deliver goods to Puerto Rico have sent additional ships and goods to the area. The act was waived to help goods arrive more swiftly and efficiently without delaying aid because of bureaucratic hurdles. If there is a shortage of U.S. operated boats, companies can now use a larger pool of boats to get goods to the island.

Although goods are arriving at ports, they are piling up. The island’s damaged roadways and infrastructure is making it difficult to deliver fuel and goods to areas of the island that need it most. The waiver of The Jones Act currently expires Oct. 7.

Has The Jones Act Been Waived Before?

Yes. The Jones Act was also waived recently for Hurricanes Harvey and Irma earlier this year. Those waivers helped relieve fuel supply issues, which occurred when petroleum distribution was affected in the Gulf of Mexico. The act was also waved during Superstorm Sandy in 2012.

Will a Debate Ensue Over the Continued Use of The Jones Act?

There are both past and present debates about the continued use of The Jones Act. Sen. John McCain recently called for a permanent repeal of The Jones Act. McCain has called the act an “antiquated, protectionist law that has driven up costs and crippled Puerto Rico’s economy.”

Supporters of The Jones Act emphasize that restricting the use of good shipments to only U.S. ships and crews strengthens the U.S. economy.

Besides Foreign Shipping Regulations, What Else Does The Jones Act Cover? 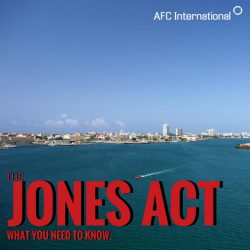 The Jones Act was waived to help goods arrive swiftly and efficiently to Puerto Rico.

The act also covers maritime industry safety regulations, particularly in regards to ship crews. The act protects the rights of all crew members, mandates compensation for injuries that occur due to company negligence and puts in place protocols for ship maintenance and safety equipment, including lifeboats. The act also requires all ships to adhere to Environmental Protection Agency (EPA) regulations.

Connect With a Customs Broker

Importers seeking to transport their goods quickly and efficiently can count on a Licensed Customs Broker. Customs brokers help you navigate shipping hurdles and paperwork you encounter during your importing journey.