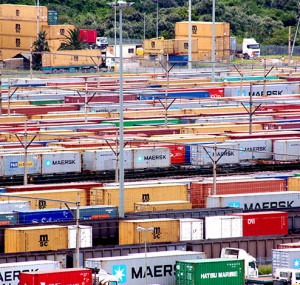 Although the PCS is suspended, it still remains a serious issue as carriers are still struggling to keep service on schedule.

Last month we updated you on the West Coast Port Congestion situation. At that time, a record was set for the most waiting at one time in two years with 12 container ships anchored at the ports. The situation is not getting better. The International Longshore Workers Union and the Pacific Maritime Association have not reached a new contract agreement since talks began in May. The only glimmer of hope came when the Orient Overseas Container Line (OOCL) decided to suspend the Port Congestion Surcharge last month. With the holidays approaching, businesses that rely on importing and exporting are already feeling the effects. The long slowdown has some industry professionals saying the West Coast port congestion is catastrophic.

The issue of a Port Congestion Surcharge (PCS)  has been ongoing. In early November, to offset congestion costs, steamship lines decided to apply surcharges on cargo moving to and from the West Coast Ports. Soon after that announcement, the OOCL decided to suspend the PCS after many questioned the effectiveness of the surcharge. Carriers again wanted to assess a PCS on cargo between Asia and the West Coast in the final week of November. Shippers attested that by rule, a charge cannot be issued until a 30-day notice. On Wednesday, November 26 the TSA held a conference and decided to suspend the PCS once again. Although the PCS is suspended, it still remains a serious issue as carriers are still struggling to keep service on schedule.

Impact On The Food Industry

The food industry has been impacted heavily with the congestion on the West Coast. In 2009, 110 billion pounds of food were imported into the United States. A variety of foods are imported daily into the U.S. that are not produced in the states due factors like climate. One specific food being impacted is potatoes. There are dozens of containers on the port full of potatoes. With container ships at a standstill, customers of these potato companies are turning to other producers in other countries. In the case of some companies, some of these potatoes are specifically grown to be made into chips. That means the potatoes cannot be made into other products like fries. With no movement at the port on containers, it’s hard to imagine these potatoes will make it to their destination without being spoiled. Think of the impact this is having on other foods that are sitting at the port in containers that are not moving.

With congestion on West Coast ports, shippers are turning to air freight to ship goods.

With congestion on West Coast ports, shippers are turning to air freight to ship goods. However, this is not a good time for air cargo rates for two reasons; the port congestion and the holiday season. Shippers have moved from ocean to air in hopes of getting their goods to its destination. This is especially crucial at this time because of the holiday season.  Air cargo rates, however, have soared 17 percent in only one month. With holiday shopping already in full swing, companies are already feeling the effects of the West Coast port congestion in their pockets and on the shelves.

Here at AFC, we will continue to monitor the evolving situation. AFC International is committed to providing relevant and timely industry news, and our knowledgeable customs brokerage staff is here to you clear your imports in the most efficient way possible.

What are your thoughts on the West Coast Congestion? Are you wondering how AFC can help you clear your imports? Leave us a comment or follow us on Twitter and Google Plus to join the conversation.