Even with the congestion continuing in the West coast, importers still must clear through U.S. Customs.

For several weeks now, there has been cargo congestion in the ports of Los Angeles and Long Beach. Just last week, the 12 container ships anchored at the ports set a record as the most waiting at one time in two years. As an international shipper, this congestion is worrisome because this port is the largest container gateway in the Americas. There is much speculation on the reason for this congestion. According to the Pacific Maritime Association (PMA), the International Longshore and Warehouse Union (ILWU) is not a factor. PMA is negotiating and representing over 70 multinational ocean carriers and maritime companies during this crisis.  They contend that the congestion is being caused by, among other things, chassis shortages and truck drivers leaving the industry. Even with the congestion continuing in the West coast, importers still must clear through U.S. Customs. Here is some essential information to help you navigate through the congestion on the West Coast.

UPDATE! As of 11/18/2014, the Orient Overseas Container Line (OOCL) has decided to suspend the Port Congestion Surcharge.

Prior to this announcement, steamship lines decided to apply surcharges on cargo moving to and from the West Coast Ports to offset congestion costs. This surcharge affects Full Container Load (FCL) and Less-than Container Load (LCL) and will be based on the arrival date of the cargo. All cargo received through the West Coast Ports on or after 11/24/2014 would be subject to the surcharge. These specific surcharges for imports included $800 per 20′ / $1,000 per 40′ / $1,265 per 45′. For exports, the surcharges would be $240 per 20′ / $300 per 40′ HC / $340 per 45′. Pickup surcharges of $100 per container are also being implemented by carriers for Intermodal Door Delivery. Many carriers became hesitant to implement the surcharge fee, which had many questioning the effectiveness of the surcharge and could be a major factor in the suspension of the Port Congestion Surcharge.

Importing and Exporting: Alternatives To The West Coast

While many carriers are still using the West Coast to import and export goods, there are a variety of alternatives to shipping through the West Coast. Many shippers are heading to other West Coast ports. Although Los Angeles and Long Beach Ports are the biggest in the Americas, another option for shippers is the San Diego Port, who recently just celebrated the completion of a new waterfront improvement project. Some shippers are ignoring the West Coast altogether and heading to East Coast ports. Another option is shipping cargo through the air, the fastest method for critical cargo. 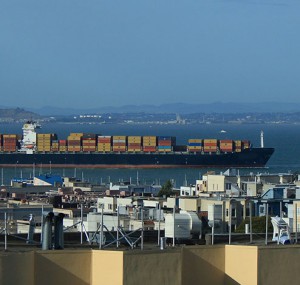 It is essential that during this time shippers take advantage of the knowledge of customs brokers.

The situation in the West Coast is in flux, and more information is coming literally by the minute. It is essential that during this time shippers take advantage of the knowledge of customs brokers. For a business shipping through the West Coast, an unexpected surcharge or unexpected time delay could mean valuable time and money being wasted. Customs brokers will be able to assist in navigating shipments in the most timely and cost effective way. Here at AFC International, we are dedicated to being a trusted resource for information regarding the West Coast congestion and customs brokerage.

Do you have any questions concerning the West Coast congestion or customs brokerage? Leave us a comment below or chat with on Twitter and Google Plus.

« Basic Import Documents To Clear Customs     How To Import Footwear »